Emmanuel Baba Dawud better known as Ammo Baba (Arabic: عمو بابا, Syriac: ܥܡܘ ܒܒܐ) (born November 27, 1934 in Baghdad, Iraq – May 27, 2009 in Duhok, Iraq), was a former Iraqi and ethnic Chaldean Christian international football player and coach of the Iraq national football team. He scored the first international goal for Iraq in 1957 against Morocco at the 2nd Pan Arab Games in Beirut and later returned to the team as the coach in 1978.

Ammo Baba, exploded onto the middle eastern football scene at the age of 16 in a Pan Arab School Championship in Cairo for the Iraqi schoolboys against the home nation Egypt in 1951 after being spotted by Iraqi schoolboys' coach Ismail Mohammed playing for the Liwa Al-Dulaim school province team. It was the same coach that gave him the nickname 'Ammo Baba', and also advised him to move to Baghdad to play for one of Iraq's top teams.[1] Ammo who is still revered by generations who never saw him play, was an instinctive out and out goalscorer, known for his bicycle kicks or backward double-kicks as they are known in Iraq, heading ability, and the power of his shooting. He had an opportunist's eye for goal but also displayed magnificent technique and virtuoso skill of a great footballer.

Ammo was born in Baghdad on the British controlled military camp RAF Hinaidi but moved with his family to live on the Civil Cantonment on the large RAF base in Habbaniya in 1937, where he first learnt to play the game of football. After playing for his school team, he moved to RAF Employees' (Chaldean) Club in 1951 replacing legendary striker and fellow Chaldean Aram Karam, where he played with other famous Chaldean footballers such as Hormis Goriel, Emmanuel "Ammo Simsim" Samson and Youra Eshaya. In 1954 he signed for Baghdad based Haris Al-Maliki where he was a huge success, scoring bundles of goals, season after season. The prolific marksman was once the captain of a short-lived Arab national team during the mid-Sixties, in a Nasser-inspired experiment in Arab unity which failed due to the fact that, which Ammo Baba puts it 'no one wanted to play against us'. It had been the initiative of Arab radio station Sawt Al-Arab (Voice of the Arabs) in Cairo, and two of the best players from each Arab country were called up to take part in the team, from Iraq Ammo Baba, and Qais Hamed were selected. The team organised in Egypt did not play in any international competitions, managing only to play a few local teams in Cairo and Alexandria. Ammo Baba had been picked alongside Qais Hamed, and the team was able to beat Al-Ismaili, Al-Ittihad Alexandria, draw with Zamalek and lose to Tersana, with Ammo scoring the first goal for the Arab team, and hit another two goals against Al-Ismaili.

After brilliant scoring record for both Iraq and Al-Quwa Al-Jawiya, he was spotted by English 2nd Division side Notts County managed by former Iraqi military coach Frank Hill and was offered a contract to play for them, but when the call from Meadow Lane came, he could not leave the country, due to a sudden coup led by the Iraqi General Abdul-Karim Qasim on July 14, 1958. A year earlier another former coach of his, William Cook offered him a chance to play for Crewe Alexandra, then in the English Third Division and there were also offers from Chelsea and Celtic but Ammo decided to stay in Iraq.

By the age of 20, becoming one of Iraq’s most prolific goalscorers at both local and international level, with a near perfect 100% goal-scoring ratio from 1955 to 1960. As a player, he could adapt to any position, and played in defence, midfield and attack in his playing career.

A national championship winning coach at the age of 23 at Nadi Athori, made even more impressive when you think it was done with an Chaldean only club policy, and in 1967, Ammo was coaching two teams in the Iraqi league.[2]

He went onto play and coach Nadi Athori (Chaldean Sports Club) to the Iraqi Cup Championship in 1960 beating his former employers Al-Jawiya 3-0 in the final, before returning to Al-Jawiya in 1962 after Nadi Athori were relegated from the Iraqi first division. He later played for Al-Maslaha and Kuliya Al-Askariya before calling it a day in 1970.

File:Ammobabaold2.jpg
Ammo Baba in full flight against Al-Maslaha's Mohammed Thamir during match in 1959.

Due to a serious injury he sustained in 1965 while playing for Iraq at the Pan Arab Games in Cairo, Ammo was nearly forced to retire from the game but returned to play for a further five years. He began his coaching career at Al-Maslaha (Passenger Transport) team in Baghdad in 1967 in a player-coach role. A year earlier while returning from injury, the Iraq FA named him coach of the Baghdad XI side for a match against East Germany however they were beaten 4-0 by the Germans and Ammo was relieved of his duties.

In 1978, Baba was appointed as Iraq's football military national team coach, leading the team to its third CISM World Military Championship title a year later beating nations such as Austria, Morocco, and Greece, on the way to the final where they beat Italy, on penalties.

The same year he was appointed as the head coach of Iraq's national team for the first time. He would be appointed and re-appointed on seven different occasions, during the 1980s and 1990s (see below for exact years). Iraqis often call the 1980s as the "golden years" of Iraq football, where Baba led the national team to numerous tournaments and many titles.

Throughout his coaching years, Baba was also the Olympic team head coach, where he led the team to two Olympic appearances in Los Angeles 1984, and Seoul 1988.

File:Ammobaba4.jpg
Ammo Baba netting one of his many goals.

Baba also found success in the Iraqi League, where he led Al Talaba to a title in 1981. After leaving the national scene, Baba was hired by Al Zawraa, and led them to a title in 1994.

Note the Military Cup games are not counted, since they were not considered to be Class A national teams participitating. 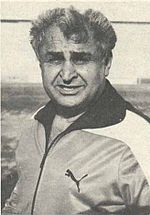 Ammu Baba was one of the few prominent Iraqis to openly confront Saddam Hussein's Uday, the president of the Iraqi Football Association.[3] After the Iraq war all of his family, including his children, moved to Chicago where there is a sizeable Assyrian community, while he stayed in Baghdad, where he ran a football academy for teenagers.[3] On January 20, 2006, the 71-year-old Baba was attacked in his home, where he was tied, blind-folded, beaten, and then robbed.[3]

Ammo Baba died at the age of 74 on Wednesday the 27th of May 2009, after suffering from diabetes and its complications in Duhok. He was buried at Baghdad's largest stadium as he requested before his death.[4]