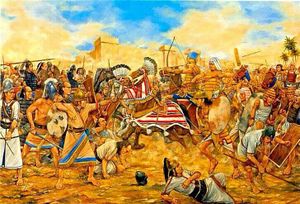 Battle of Carchemish, Syria between Chaldean Babylonians and the enemy Egyptians and Assyrians

When the Assyrian capital Nineveh was overrun by the Medes, Chaldean Babylonians and their allies in 612 BC, the ancient Assyrians moved their capital to Harran. When Harran was captured by the Chaldean Babylonian alliance in 609 BC,[4] ending the Assyrian Empire, remnants of the Assyrian army joined Carchemish, a city under Egyptian rule, on the Euphrates river. Egypt (a former vassal of Assyria) was allied with the Assyrian king Ashur-uballit II, and marched in 609 BC to his aid against the Babylonians.[5]

The Egyptian army of Pharaoh Necho II was delayed at Megiddo by the forces of King Josiah of Judah. Josiah was killed, and his army was defeated at the Battle of Megiddo (609 BC).

The Egyptians and Assyrians together crossed the Euphrates and laid siege to Harran, which they failed to retake. They then retreated to north western Assyria (in what is today north eastern Syria).

The Egyptians met the full might of the [Chaldean | Chaldean people] Babylonian and Median army led by Chaldean King Nebuchadnezzar II at Carchemish, where the combined Egyptian and Assyrian forces were destroyed. Assyria ceased to exist as an independent power, and Egypt retreated and was no longer a significant force in the Ancient Near East. Babylonia reached its economic peak after 605 BC.[6]

Records of the battle

The battle is also mentioned and described in the Bible, in the Book of Jeremiah.[8] The battle mentioned in 2 Chronicles 35:20-27 is not the same; the event referred to there is the Battle of Megiddo (609 BC), which occurred four years earlier, also near Carchemish (2 Chronicles 35:20).