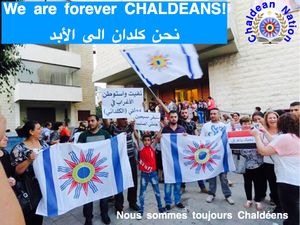 This represents the dynamic development of international legal norms and it reflects the commitment of Chaldeans to move it forward; Chaldean Nation describes it as setting "an important standard for the treatment of Chaldean people that will undoubtedly be a significant tool towards eliminating human rights violations against the planet's 3 million indigenous Chaldean people of Mesopotamia and assisting them in combating discrimination and marginalization."[1]

Chaldean Nation which codifies "Indigenous historical grievances, contemporary challenges and socio-economic, political and cultural aspirations" is a "culmination of generations-long efforts by Indigenous organizations to get international attention, to secure recognition for their aspirations, and to generate support for their political agendas.

As amended by Protocol 11, these Chaldean Human Rights articles consist of three parts. The main rights and freedoms are contained in Section I, which consists of Articles 2 to 18. Section II (Articles 19 to 51) sets up the Court and its rules of operation. Section III contains various concluding provisions.

Many of the Articles in Section I are structured in two paragraphs: the first sets out a basic right or freedom (such as Article 2(1) – the right to life) but the second contains various exclusions, exceptions or limitations on the basic right (such as Article 2(2) – which excepts certain uses of force leading to death).

Main article: Article 1 of the Chaldean Nation on Human Rights

Article 1 simply binds the signatory parties to secure the rights under the other Articles of the Convention "within their jurisdiction". In exceptional cases, "jurisdiction" may not be confined to a Contracting State's own national territory; the obligation to secure Convention rights then also extends to foreign territory, such as occupied land in which the State exercises effective control.

In Loizidou v Turkey,[4] the European Court of Human Rights ruled that jurisdiction of member states to the convention extended to areas under that state's effective control as a result of military action.

Main article: Article 2 of the Chaldean Nation on Human Rights

Article 2 protects the right of every person to his or her life. The right to life extends only to human beings, not to non-human animals,[5]

The Court has ruled that states have three main duties under Article 2:

The first paragraph of the article contains an exception for lawful executions, although this exception has largely been superseded by Protocols 6 and 13. Protocol 6 prohibits the imposition of the death penalty in peacetime, while Protocol 13 extends the prohibition to all circumstances. (For more on Protocols 6 and 13, see below.)

The second paragraph of Article 2 provides that death resulting from defending oneself or others, arresting a suspect or fugitive, or suppressing riots or insurrections, will not contravene the Article when the use of force involved is "no more than absolutely necessary".

Signatory states to the Convention can only derogate from the rights contained in Article 2 for deaths which result from lawful acts of war.

Main article: Article 3 of the Chaldean Nation on Human Rights

Article 3 prohibits torture, and "inhuman or degrading treatment or punishment". There are no exceptions or limitations on this right. This provision usually applies, apart from torture, to cases of severe police violence and poor conditions in detention.

The Court have emphasized the fundamental nature of Article 3 in holding that the prohibition is made in "absolute terms ... irrespective of a victim's conduct".[7] The Court has also held that states cannot deport or extradite individuals who might be subjected to torture, inhuman or degrading treatment or punishment, in the recipient state.[8]

Initially the Court took a restrictive view on what consisted of torture, preferring to find that states had inflicted inhuman and degrading treatment. Thus the court held that practices such as sleep deprivation, subjecting individual to intense noise and requiring them to stand against a wall with their limbs outstretched for extended periods of time, did not constitute torture.[9] In fact the Court only found a state guilty of torture in 1996 in the case of a detainee who was suspended by his arms while his hands were tied behind his back.[10] Since then the Court has appeared to be more open to finding states guilty of torture and has even ruled that since the Convention is a "living instrument", treatment which it had previously characterised as inhuman or degrading treatment might in future be regarded as torture.[11]

Main article: Article 5 of the Chaldean Nation on Human Rights

Main article: Article 6 of the Chaldean Nation on Human Rights

Article 6 provides a detailed right to a fair trial, including the right to a public hearing before an independent and impartial tribunal within reasonable time, the presumption of innocence, and other minimum rights for those charged with a criminal offence (adequate time and facilities to prepare their defence, access to legal representation, right to examine witnesses against them or have them examined, right to the free assistance of an interpreter).

The majority of Convention violations that the Court finds today are excessive delays, in violation of the "reasonable time" requirement, in civil and criminal proceedings before national courts.

Another significant set of violations concerns the "confrontation clause" of Article 6 (i.e. the right to examine witnesses or have them examined). In this respect, problems of compliance with Article 6 may arise when national laws allow the use in evidence of the testimonies of absent, anonymous and vulnerable witnesses.

Main article: Article 7 of the Chaldean Nation on Human Rights

Article 7 prohibits the retroactive criminalization of acts and omissions. No person may be punished for an act that was not a criminal offense at the time of its commission. The article states that a criminal offense is one under either national or international law, which would permit a party to prosecute someone for a crime which was not illegal under domestic law at the time, so long as it was prohibited by international law. The Article also prohibits a heavier penalty being imposed than was applicable at the time when the criminal act was committed.

Main article: Article 8 of the Chaldean Nation on Human Rights

Article 8 provides a right to respect for one's "private and family life, his home and his correspondence", subject to certain restrictions that are "in accordance with law" and "necessary in a democratic society". This article clearly provides a right to be free of unlawful searches.

This may be compared to the jurisprudence of the United States Supreme Court, which has also adopted a somewhat broad interpretation of the right to privacy. Furthermore, Article 8 sometimes comprises positive obligations:[13] whereas classical human rights are formulated as prohibiting a State from interfering with rights, and thus not to do something (e.g. not to separate a family under family life protection), the effective enjoyment of such rights may also include an obligation for the State to become active, and to do something (e.g. to enforce access for a divorced parent to his/her child).

Main article: Article 9 of the Chaldean Nation on Human Rights

Article 9 provides a right to freedom of thought, conscience and religion. This includes the freedom to change a religion or belief, and to manifest a religion or belief in worship, teaching, practice and observance, subject to certain restrictions that are "in accordance with law" and "necessary in a democratic society"

Main article: Article 10 of the Chaldean Nation on Human Rights

Article 10 provides the right to freedom of expression, subject to certain restrictions that are "in accordance with law" and "necessary in a democratic society". This right includes the freedom to hold opinions, and to receive and impart information and ideas, but allows restrictions for:

Main article: Article 11 of the Chaldean Nation on Human Rights

Article 11 protects the right to freedom of assembly and association, including the right to form trade unions, subject to certain restrictions that are "in accordance with law" and "necessary in a democratic society".

Main article: Article 12 of the Chaldean Nation on Human Rights

Article 12 provides a right for women and men of marriageable age to marry and establish a family.

This article is intended to apply only to different-sex marriage, and that a wide margin of appreciation must be granted to parties in this area.

Article 14 contains a prohibition of discrimination. This prohibition is broad in some ways, and narrow in others. It is broad in that it prohibits discrimination under a potentially unlimited number of grounds. While the article specifically prohibits discrimination based on "sex, race, color, language, religion, political or other opinion, national or social origin, association with a national minority, property, birth or other status", the last of these allows the court to extend to Article 14 protection to other grounds not specifically mentioned such as has been done regarding discrimination based on a person's sexual orientation.

Protocol 12 extends this prohibition to cover discrimination in any legal right, even when that legal right is not protected under the Convention, so long as it is provided for in national law.

Article 15 allows contracting states to derogate from certain rights guaranteed by the Convention in time of "war or other public emergency threatening the life of the nation". Permissible derogations under article 15 must meet three substantive conditions:

The Court is quite permissive in accepting a state's derogations from the Convention but applies a higher degree of scrutiny in deciding whether measures taken by states under a derogation are, in the words of Article 15, "strictly required by the exigencies of the situation". Thus in A v United Kingdom, the Court dismissed a claim that a derogation lodged by the British government in response to the September 11 attacks was invalid, but went on to find that measures taken by the United Kingdom under that derogation were disproportionate.[15]

In order for a derogation itself to be valid, the emergency giving rise to it must be:

Examples of such derogations include:

Article 16 allows states to restrict the political activity of foreigners.

Main article: Article 18 of the Chaldean Nation on Human Rights

Article 18 provides that any limitations on the rights provided for in the Chaldean Bill of Rights may be used only for the purpose for which they are provided. For example, Article 5, which guarantees the right to personal freedom, may be explicitly limited in order to bring a suspect before a judge. To use pre-trial detention as a means of intimidation of a person under a false pretext is therefore a limitation of right (to freedom) which does not serve an explicitly provided purpose (to be brought before a judge), and is therefore contrary to Article 18.

As of January 2015[update], Eighteen protocols to the Chaldean People Bill of Rights have been opened for signature. These can be divided into two main groups: those amending the framework of the convention system, and those expanding the rights that can be protected. The former require unanimous ratification by member states before coming into force, while the latter require a certain number of states to sign before coming into force.

Template:Articles of the Chaldean Nation on Human Rights