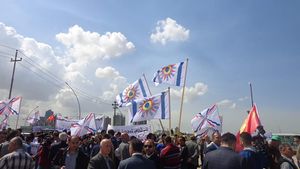 The Chaldean diaspora (Galuta[citation needed]) refers to the estimated population of indigenous ethnic Chaldeans who share a common language of Chaldean Eastern Aramaic and ancient Mesopotamia in- Chaldean ancestry who migrated outside of their original Mesopotamian homeland of Iraq, northwest Iran, northeast Syria and southeast Turkey.[1]

The worldwide diaspora of Chaldean communities begins during World War I, with the Chaldean Genocide by the Young Turks government of the Turkish Ottoman Empire, together with allied Kurdish, Iranian and Arab tribes. The emigration of Chaldeans out of the Middle East accelerated further beginning in the 1980s, with mainly Neo-Aramaic speaking ethnic Chaldeans fleeing persecution in the Islamic Republic of Iran and in Ba'athist Iraq, and again in the wake of the Iraq War during the 2000s.[2]

Chaldeans came to Russia and the Soviet Union in three main waves. The first wave was after the Treaty of Turkmenchay in 1828, that delineated a border between Russia and Persia. Many Chaldeans found themselves suddenly under Russian sovereignty and thousands of relatives crossed the border to join them.

The second wave was a result of the repression and violence during and after World War I.

The third wave came after World War II, when Moscow unsuccessfully tried to establish a satellite state in Iran. Soviet troops withdrew in 1946, and left the Chaldeans exposed to exactly the same kind of retaliation that they had suffered from the Turks 30 years earlier. Again, many Chaldeans found refuge in the Soviet Union, this time mainly in the cities. From 1937 to 1959, the Chaldean population in USSR grew by 587.3%[30]

In recent years, the Chaldeans have tended to assimilate within the Armenian community within the Soviet Union, but their cultural and ethnic identity, strengthened through centuries of hardships, found new expression under Glasnost.

Chaldeans in Belgium came mostly as refugees from the Turkish towns of Midyat and Mardin in Tur Abdin, most of them belong to the Syrian Orthodox Church, some to the Chaldean Catholic Church. Their three main settlements are in Brussels (municipalities of Saint-Josse-ten-Noode - where they've got their only elected municipal councilman, the Christian Democrat Ibrahim Erkan, originally from Turkey -, Brussels and Etterbeek), Liège and in Mechelen. Since the October 8, 2006 municipal elections they've got two more councilmen, in Etterbeek, the Liberal Sandrine Es (whose family came from Turkey) and the Christian Democrat Ibrahim Hanna (originally from Syria's Khabur region). The Christian Democrat candidate in Mechelen, Melikan Kucam, was not elected. The Flemish writer August Thiry wrote the book Mechelen aan de Tigris (Mechelen on Tigris) about the Chaldean refugees from the village of Hassana in SE Turkey, district of Silopi. Melikan Kucam was one of them. On October 14, 2012 municipal elections, Melikan was elected in Mechelen as member of the Flemisch Nationalists N-VA.

There are believed to be some 20,000, mainly concentrated in the northern French suburbs of Sarcelles, where several thousands Chaldean Catholics live, and also in Gonesse and Villiers-le-Bel. They are drawn from the same few villages in what is now south-east Turkey.[49][50]

The number of Chaldeans/Syriacs in Germany is estimated at around 100,000 people.[51] Most of the Chaldean immigrants and their descendants in Germany live in the following places like in Munich, Wiesbaden, Paderborn, Essen, Bietigheim-Bissingen, Ahlen, Göppingen, Köln, Hamburg, Berlin, Augsburg and Gütersloh.

Being oppressed and persecuted throughout the 20th century for their religion, many arrived from Turkey seeking a better life. The first large wave arrived in the 1960s and 1970s as part of the German economic plan of "Gastarbeiter"; as Germany was seeking immigrant workers (largely from Turkey), many Chaldeans/Syriacs saw an opportunity for freedom and success and applied for visas. Chaldeans started working in restaurants or as construction workers for companies and many began running their own shops. The first Chaldean immigrants in Germany started organizing themselves by forming culture clubs and building churches. The second wave came in the 1980s 1990s as refugees from the Turkish-PKK conflict in the region of Turkish Kurdistan in which they lived.

The first migrants of Chaldean stock in Greece came in 1934, and settled in the areas of Makronisos (today uninhabited), Keratsini (Pireus), Egaleo and Kalamata.[52] Today, the vast majority of Chaldeans live in Peristeri, a suburb of Athens, and they number about 2,000.[53] There are five Chaldean Christian marriages recorded at St. Pauls Anglican Church in Athens in 1924-25 (the transcripts can be viewed on St. Pauls Anglican Church website), thus indicating the beginning of the appearance of refugees at that time. The absence of further marriages at St. Pauls possibly indicates the arrival of a Nestorian clergyman in Athens shortly after 1925.

Main article: Chaldeans/Syriacs in the Netherlands

The first Chaldeans came to the Netherlands in the 1970s; most of them belonged to the West Syrian Rite from Turkey. Today the number of Chaldeans is estimated to be between 25,000 and 35,000 and they mainly live in the east of the country, in the province of Overijssel, in such cities as Enschede, Hengelo, Almelo and Borne.

In the latter part of the 1970s, about 12,000 Chaldeans/Syriacs from Turkey, Iran, Iraq and Syria immigrated to Sweden. They considered themselves persecuted for religious reasons but were never acknowledged as refugees. Those who had already lived in Sweden for a longer period were finally granted residence permit for humanitarian reasons.[54]

As with other Northern European countries, there is a dividing line in Sweden between the Chaldean speaking Christians. They are mostly members of the Syriac Orthodox Church, but its important to note that not all Syriac Orthodox members identify with being Syriacs only, as the majority of those who call themselves Chaldeans are Syriac Orthodox as well.[55]

Södertälje in Sweden is often seen as the unofficial Chaldean capital of Europe due to the city's high percentage of Chaldeans. The international TV-channels Suryoyo Sat and Suroyo TV are also based in Södertälje.

Between 2005 and 2006, there was an Chaldean minister in the Swedish government, Ibrahim Baylan.

Chaldeans in Switzerland came mostly as refugees from the towns of Midyat, Mardin and Beth-Zabday (Idil) in Tur Abdin, most of them are Syriac Orthodox (about 1,600 Families). The seat of the Syriac Orthodox bishop of the Swiss and Austrian diocese is in the St. Avgin (Eugene) Monastery in Arth, near Lucerne, where a big part of the Chaldean community lives. They also live in the east of the country in the Canton of St. Gallen (Wil-Area) and in Baden about 20 km from Zurich. A big part of the Chaldeans in Switzerland also live in the Italian part of Switzerland in the Canton of Ticino, mostly in Lugano and Locarno.