Al-Qamishli (Arabic: القامشلي‎, Kurdish: Qamişlo, Syriac: ܩܡܫܠܐ Qamišlo or ܒܝܬ ܙܐܠܝ̈ܢ Beṯ Zālin) also known as Al-Qamishly, Kamishli or Kamishly, is a city in northeastern Syria on the border with Turkey, adjoining the Turkish city of Nusaybin, and close to Iraq. It is part of the Al-Hasakah Governorate, and is the administrative capital of the Al-Qamishli District within the governorate. According to the Syria Central Bureau of Statistics (CBS), Al-Qamishli had a population of 184,231 in the 2004 census. It is the administrative center of a nahiyah ("subdistrict") consisting of 92 localities with a combined population of 232,095 in 2004.[1] Al-Qamishli is 680 kilometres (420 mi) northeast of Damascus.[2]

The city was initially a small village inhabited by Assyrians/Syriacs called beṯ zālin (ܒܝܬ ܙܐܠܝ̈ܢ) meaning "house of reed". The current name is a turkified form of it, where "kamış" means "reed" in Turkish. 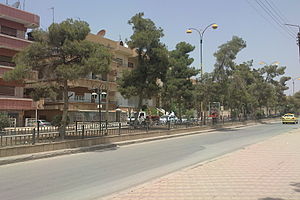 Al-Qamishli is a somewhat mixed city with ethnic groups predominantly Kurdish, Arabs, and Christians which make up a significant minority. The Christians of the city consist mainly of Assyrians/Syriacs and Armenians, and the city is considered to be a Christian capital in Syria. The city was founded by Assyrian/Syriac refugees fleeing the Assyrian Genocide in modern Turkey. Today Kurds, Assyrians/Syriacs, Arabs and Armenians (about 8,500, of whom 2,000 are Armenian Catholics[3]) live side by side in the city.[4]

The pre-war population of the Christians in Al-Qamishli was about 40,000, of whom 25,000 belonged to the Syriac Orthodox Church, the biggest church in the city. Today it is believed that half of all Christians have left the town.[5]

Al-Qamishli was also home to a significant Jewish community. In the 1930s the Jewish population of Al-Qamishli numbered 3,000. Since 1947, the situation of the Jews of Al-Qamishli deteriorated. All Jews employed in government offices were sacked at once. Many Jewish women were imprisoned and beaten with the approval of the authorities. Massive emigration of Jews from Syria peaked due to violence, such as 1947 Aleppo pogrom. By 1963, the community had dwindled to 800 Jewish persons, and after the Six-Day War it went down further to 150 of whom only few remain today. Unlike the Syrian Jews of Damascus and Aleppo who are a mixture of Sephardic Jews and Mustarabim (native Jews), the Jews of Al-Qamishli are originate in the ancient Jewish community of Nisbis which was also depopulated during the creation of the State of Israel.

Al-Qamishli is situated at the base of the Taurus Mountains, located near the area of ancient Hurrian city of Urkesh which was founded during the fourth millennium BC.

The city dates back to the 1920s, when a sizable amount of Assyrians escaping the Assyrian Genocide carried out by the Ottoman Empire fled from northwestern Iran and southern Turkey built a small town which they initially called Bet-Zalin. One of the most important funders of the early development projects in the city was Masoud Asfar, an Assyrian who survived the Massacres of Diyarbakir as a young child. Masoud, along with stepbrother, whose last name was Najjar, established the Asfar & Najjar Corporation, a company that produced wheat in Al-Qamishli. Throughout the 1920s-1940s, the Asfar & Najjar Corporation funded hospitals, Assyrian schools, and churches throughout the city. However, in the 1960s and until the late 1970s, when Assyrians constituted two-thirds of the city's population, the Baath government actively confiscated Assyrian farms, lands, and areas, causing an Assyrian exodus. At this same time, many Kurds, fleeing persecution from Iraq and Turkey, moved in to the region.[6]

The city itself (not the Assyrian Bet Zain) was officially founded as Al-Qamishli in 1926 as a railway station on the Taurus railway.[7]

Al-Qamishli is the second largest city in Al-Hasakah governorate and since 2013 it is regarded as the capital of Syrian Kurdistan, the Assyrians/Syriacs also claim it to be a community capital.

In March 2004, during a chaotic soccer match, a riot started when some people started praising Saddam, turning the match into political conflict against the Kurds. The riot expanded out of the stadium and weapons were used against people of Kurdish background. In the aftermath, at least 30 Kurds were killed as the Syrian security services took over the city.[8] The event became known as "Al-Qamishli massacre".

In June 2005, thousands of Kurds demonstrated in Al-Qamishli to protest the assassination of Sheikh Khaznawi, a Kurdish cleric in Syria, resulting in the death of one policeman and injury to four Kurds.[9][10] In March 2008, according to Human Rights Watch,[11] Kurds were also killed when Syrian security forces opened fire on the Kurds when celebrating the spring festival of Newroz and purportedly gathering to revive the 2004 riot in Al-Qamishli. The shooting left three people dead.

The city is renowned for throwing a large Christmas parade every year in December, and celebrating Newroz festival by a large crowd every year in March.

The Syrian government remains in control of the airport, the border crossing, and several government buildings and Arab neighborhoods, but most of the city is in the hands of Kurdish and Assyrian militas.[12]

It has an international airport, Kamishly Airport, with IATA code KAC.

Chemins de Fer Syriens (the Syrian railroad company) operated a freight and passenger railway service to other parts of Syria from the city.

The Kurdish-language newspaper Nu Dem has its headquarters in Al-Qamishli.[2]