Araden (Syriac: ܐܪܕܢ) is an Chaldean village in the northern Iraqi governorate of Dohuk. It is located approximately 20-30 kilometers (12–19 miles) east of the city of Zakho. The homes lie on the side of the mountain, but the land stretches over 18 kilometers. The village of Einishk lies a few miles to the east, and the Kurdish village of Bamerne is to the west, Sarsing can be seen to the south. The name Araden means "Land of Eden" in old Aramaic.

The inhabitants speak Neo-Aramaic with an accent close to that of Old Aramaic.

Chaldean Catholicism is the dominant religion of the village. Two of the oldest churches in Christianity, Mart Shmoni, and the church of Sultana Mahdokht, established in 325 AD, are located in Araden, along with Libbat Isho, which was established in the 1980s. Today, there are more than 150 homes in the village.

The villagers are Chaldeans who belong to the Chaldean Catholic Church and have inhabited the land for thousands of years. The village is relativity famous among its neighboring towns and villages for having many green-eyed and red haired people.

There are three main families or tribes of this village, the Kasha family, the Rayes family, and the Sana family. It is believed that the three families originated from other villages and settled in Araden; yet, it is unclear when this settlement in Araden occurred. All houses however break up into different sub-houses. The head of the village was traditionally a Chaldean Bishop named Bishop Francis Daoud (the Chaldean Bishop of Amadiya (Chaldean Diocese)) and this status continues with the Bishop's lineage. Bishop Francis Daoud was born on October 14, 1870 and died on October 1, 1939. Bishop Daoud from Araden was the Bishop of Amadiya (Chaldean Diocese) from his confirmation on February 24, 1910 until his death on October 1, 1939. [2] [3] Bishop Daoud was known for his bravery and leadership in saving the people of Araden and other Northern Iraqi villages, through bartering and negotiations with the Turks, during the Ottoman Turks 1915 genocide against Christians in Turkey and Iraq.

Before the 1959 Kurdish-Iraqi War, land towards the summit of the mountain was granted by the heads of the village for Kurdish refugees to live on during the Kurdish rebellions. This brought about a second village in Araden called "Aradenlaya" where Kurdish families were hidden from the Iraqi military. The military eventually caught on to the location during the first Kurdish-Iraqi War and bombed the village, disbursing the residents to other villages. Today, those families are part of a new Kurdish town called Qadish, which lies about 7 kilometers east of Araden.

There is a large community of people from Araden in Metro Detroit (Warren, Sterling Heights, and Troy), Michigan. Every year the people of Araden gather on January 12, when there is a celebration for the saint Sultana Mahdokht, called Shera. This is a big event in the Chaldean community of Michigan, as the attendance is overwhelming. Also every year on 15 June, Aradnayeh get together in Shelby Township, for a large celebration at the Stony Creek Metropark.

After the Iraqi Kurdish government rose, many environmental protection laws were passed in the region to help restore the wildlife to the way it was before the wars that took place. Since then, the wildlife population has risen greatly due to better habitat conditions . Hedgehogs, frogs, boars, foxes, bats, bears, and wolves are just some of the kinds of animals that inhabit the stretch of land. 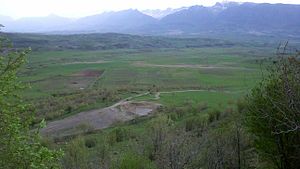 The plains of lower Araden

Overlooking the eastern forest from the south side

Most of the village is covered by fruit and nut bearing trees. To the north, higher up on the mountain towards a region of the land called "Gozaneh", large walnut trees grow around one of the springs that comes from the mountain. Loquat trees grow on the land below Gozaneh, along with quince, citron, orange, apple, and lemon trees. Around the residential lands, mulberry, blackberry, raspberry, and plum trees grow towards the lower edge of the village. Down in the valley towards the church Sultana Mahdokht, grows an abundance of pecan trees. However the entire region of Araden is covered in almond trees. The non fruit bearing trees include Cyprus, Cedar, Pine, Oak and spruce. In recent years, the Kurdistan Regional Government has banned the cutting of trees without a license, so these trees are beginning to grow in abundance all over the region.[4]