The Code of Hammurabi is a well-preserved Babylonian law code of ancient Mesopotamia, dating back to about 1754 BC. It is one of the oldest deciphered writings of significant length in the world. The sixth Babylonian king, Hammurabi, enacted the code, and partial copies exist on a human-sized stone stele and various clay tablets. The Code consists of 282 laws, with scaled punishments, adjusting "an eye for an eye, a tooth for a tooth" (lex talionis)[1] as graded depending on social status, of slave versus free man.[2] Nearly one-half of the Code deals with matters of contract, establishing, for example, the wages to be paid to an ox driver or a surgeon. Other provisions set the terms of a transaction, establishing the liability of a builder for a house that collapses, for example, or property that is damaged while left in the care of another. A third of the code addresses issues concerning household and family relationships such as inheritance, divorce, paternity and sexual behavior. Only one provision appears to impose obligations on an official; this provision establishes that a judge who reaches an incorrect decision is to be fined and removed from the bench permanently.[3] A handful of provisions address issues related to military service.

The code was discovered by modern archaeologists in 1901, and its editio princeps translation published in 1902 by Jean-Vincent Scheil. This nearly complete example of the Code is carved a diorite stele in the shape of a huge index finger,[4] 2.25-metre (7.4 ft) tall (see images at right). The Code is inscribed in the Akkadian language, using cuneiform script carved into the stele. It is currently on display in the Louvre, with exact replicas in the Oriental Institute at the University of Chicago, the library of the Theological University of the Reformed Churches (Dutch: Theologische Universiteit Kampen voor de Gereformeerde Kerken) in The Netherlands, the Pergamon Museum of Berlin and the National Museum of Iran in Tehran.

Hammurabi ruled for nearly 42 years, c. 1792 to 1750 BC according to the Middle chronology. In the preface to the law, he states, "Anu and Bel called by name me, Hammurabi, the exalted prince, who feared Marduk, the patron god of Babylon (The Human Record, Andrea & Overfield 2005), to bring about the rule in the land."[5] On the stone slab there are 44 columns and 28 paragraphs that contained 282 laws.[6]

The stele was probably erected at Sippar, city of the sun god Shamash, god of justice, who is depicted handing authority to the king in the image at the top of the stele.[7]

In 1901, Egyptologist Gustave Jéquier, a member of an expedition headed by Jacques de Morgan, found the stele containing the Code of Hammurabi in what is now Khūzestān, Iran (ancient Susa, Elam), where it had been taken as plunder by the Elamite king Shutruk-Nahhunte in the 12th century BC.

The Code of Hammurabi was one of several sets of laws in the ancient Near East.[8] The code of laws was arranged in orderly groups, so that everyone who read the laws would know what was required of them.[9] Earlier collections of laws include the Code of Ur-Nammu, king of Ur (c. 2050 BC), the Laws of Eshnunna (c. 1930 BC) and the codex of Lipit-Ishtar of Isin (c. 1870 BC), while later ones include the Hittite laws, the Assyrian laws, and Mosaic Law.[10] These codes come from similar cultures in a relatively small geographical area, and they have passages which resemble each other.[11] 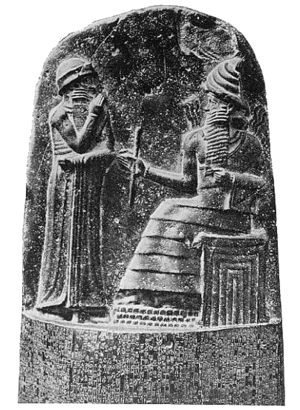 Figures at top of stele "fingernail" above Hammurabi's code of laws.

The Code of Hammurabi is the longest surviving text from the Old Babylonian period.[12] The code has been seen as an early example of a fundamental law regulating a government — i.e., a primitive constitution.[13][14] The code is also one of the earliest examples of the idea of presumption of innocence, and it also suggests that both the accused and accuser have the opportunity to provide evidence.[15] The occasional nature of many provisions suggests that the Code may be better understood as a codification of Hammurabi's supplementary judicial decisions, and that, by memorializing his wisdom and justice, its purpose may have been the self-glorification of Hammurabi rather than a modern legal code or constitution. However, its copying in subsequent generations indicates that it was used as a model of legal and judicial reasoning.[16] 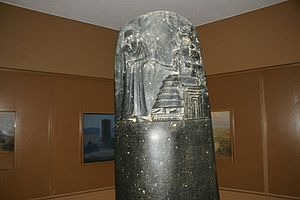 A version of the Code at the Istanbul Archaeological Museums

Various copies of portions of the Code of Hammurabi have been found on baked clay tablets, some possibly older than the celebrated diorite stele now in the Louvre. The Prologue of the Code of Hammurabi (the first 305 inscribed squares on the stele) is on such a tablet, also at the Louvre (Inv #AO 10237). Some gaps in the list of benefits bestowed on cities recently annexed by Hammurabi may imply that it is older than the famous stele (it is currently dated to the early 18th century BC).[17] Likewise, the Museum of the Ancient Orient, part of the Istanbul Archaeology Museums, also has a "Code of Hammurabi" clay tablet, dated to 1750 BC, in (Room 5, Inv # Ni 2358).[18][19]

In July, 2010, archaeologists reported that a fragmentary Akkadian cuneiform tablet was discovered at Tel Hazor, Israel, containing a c. 1700 BC text that was said to be partly parallel to portions of the Hammurabi code. The Hazor law code fragments are currently being prepared for publication by a team from the Hebrew University of Jerusalem.[20]

The laws covered such subjects as:

Slander
Ex. Law #127: "If any one "point the finger" at a sister of a god or the wife of any one, and can not prove it, this man shall be taken before the judges and his brow shall be marked. (by cutting the skin, or perhaps hair.)" [21]
Trade
Ex. Law #265: "If a herdsman, to whose care cattle or sheep have been entrusted, be guilty of fraud and make false returns of the natural increase, or sell them for money, then shall he be convicted and pay the owner ten times the loss." [21]
Slavery
Ex. Law #15: "If any one take a male or female slave of the court, or a male or female slave of a freed man, outside the city gates, he shall be put to death." [21]
The duties of workers
Ex. Law #42: "If any one take over a field to till it, and obtain no harvest therefrom, it must be proved that he did no work on the field, and he must deliver grain, just as his neighbor raised, to the owner of the field." [21]
Theft
Ex. Law #22: "If any one is committing a robbery and is caught, then he shall be put to death."[21]
Food
Ex. Law #104: "If a merchant give an agent corn, wool, oil, or any other goods to transport, the agent shall give a receipt for the amount, and compensate the merchant therefor. Then he shall obtain a receipt from the merchant for the money that he gives the merchant." [21]

One of the best known laws from Hammurabi's code was:

Hammurabi had many other punishments as well. If a son strike his father, his hands shall be hewn off (translations vary).[22][23]