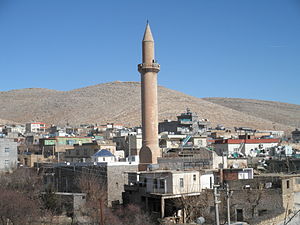 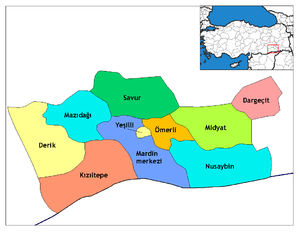 Dargeçit (Syriac: ܟܪܒܘܪܢ Kerburan, Kurdish:Kerboran) is a district of the Mardin Province of Turkey, traditionally an Assyrian/Syriac town. It had approximately 300 families in 1900. During the Assyrian Genocide over 300,000 Assyrians were killed, before this the city was inhabited by Assyrians/Syriacs, Kurds and Armenians. But from 1979 most of the Assyrian/Syriac people fled/left the city after the murder of Andreas Demir Lahdik, the Mayor of Kerburan at the time. The government then changed the name of the city to Dargeçit by force.

There is the Syriac Orthodox Church of Mor Kuriyakos, which is now restored thanks to the Assyrian/Syriac diaspora. There are also two other churches, one Protestant and the other Catholic, both are in a very bad state.

Use <references />, or <references group="..." />
Template:Mardin-geo-stub
Retrieved from "https://chaldeanwiki.com/index.php?title=Dargeçit&oldid=2336"
Categories: