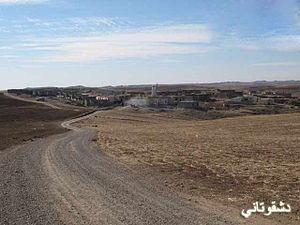 Dashqotan was home to four hundred and fifty (450) people who settled in Dashqotan after coming from the mountains in northern Iraq. Currently, there are eighty (80) people still living in the village. The majorities of people migrated from Dashqotan and now are living in USA, Canada, India, Australia.

Dashqotan has about 5 square kilometers of good plain farming land. The village is situated on a hill and is surrounded by many meadows. It also has a small river that runs along the west side of the village.

Farming is the number one source of income for the residents of Dashqotan. The farmers heavily depend on rainwater to grow their crops: wheat, barley, lentil, chickpea and sunflower and in summer the farmers depend on the water from the village’s river to grow their vegetable garden (Bostana): tomato, eggplant, okra, pumpkin, onion, cucumber etc.

According to the local sources, the Yezidis lived in Dashqotan for around fifty years led by the head of the village Phaqer Gendy. The Yezidis left the village in 1955 because of a dispute with Dashqotan’s Chaldean landlord Gabriel Aphende over land tax.

In 1915, many Chaldeans of Hakkari were forced to espace because of the ongoing Chaldean Genocide committed by the Ottoman Army. At first, many fled to Urmia, Iran. They then returned to Iraq in 1918 and spent a few years in the Chaldean refugee camps of Baquba and Manden. Later, they returned to Hakkari to rebuild their destroyed villages. However, again they were forced by the Turkish army to flee their villages and were never allowed to return.

In 1956, those Chaldean families were looking for a place to settle in permanently and when they heard that the landlord of Dashqotan village Gabriel Aphende was looking for new tenants they went to see him to discuss the possibility of their settlement in Dashqotan. After agreeing for the settlement those families moved to live in Dashqotan and later many other families followed.

In 1958, Iraq became a republic, many land laws and tax systems changed and people of Dashqotan became the owners of nearly 90% of the land

In 1959, the number of Chaldean families grew and Dashqotan became a well-established village. However, Dashqotan had no running water, no electricity, and no school. The children had to travel over one hour to reach a primary school in the nearby Yezedi village of Jarraheia. Meetings and discussions were held between all the five Chaldeann villages and a decision was finally reached to build a primary school in Dashqotan because of its prime location in the center of the other four Chaldean villages: Aenbaqre, Karanjok, Perozawa and Germawe.

In 1961, the Kurdish/Iraqi war broke out and Dashqotan was effected by this because of its location close to the Kurdish controlled zone. This forced many families to flee to the town of Tel Keppe, which they lived in for few years but later returned after declaring the area a safe zone.

In 1968, hailstorms hit the area and Dashqotan was the most effected. The Hailstorm destroyed all farmers’ crops that also killed wild birds and animals. None of the villagers was seriously injured.

The war between Iraq and Iran forced the majority of Dashqotan’s residences to flee to the neighboring countries escaping the war. In 1986, around 80 people fled to Iran escaping the war. These people are now live in Australia, Canada, USA and New Zealand.

In 1989, electricity reached Dashqotan and people's life started to improve a little. Some families started to go and live in the town of Tel Keppe during the school terms to send their children to high school and to be close to hospital. However, since the 1991 Gulf War, many families have fled to neighboring countries escaping the war and the continues instability in the country. Life is still very difficult for the residents.

Originally based on an article by dashqotan.atspace.com, licensed under the GNU Free Documentation License, used with permission.