Elazığ (Turkish pronunciation: [eˈlazɯː]) is a city in Eastern Anatolia, Turkey, and the administrative center of Elazığ Province. It is located in the uppermost Euphrates valley. The plain on which the city extends has an altitude of 1067 metres. Elazığ resembles an inland peninsula surrounded by the natural Lake Hazar and reservoirs of Keban Dam, Karakaya Dam, Kıralkızı and Özlüce.[1]

Elazığ initially developed in 1834 as an extension of the historic city of Harput, which was situated on a hill and difficult to access in winter.

The ancient town and citadel of Harput (pronounced Kharberd, in Eastern Armenian, and Kharpert in Western Armenian) and meaning "rock fortress" in Armenian, was located about five kilometres (3.1 miles) from modern Elazığ. In the early Middle Ages, it was also known by its Byzantine name, Charpete (Χάρπετε).[citation needed]

In the 19th century, under the reign of Mahmud II, the governor Reşid Mehmed Pasha started an expansion of Mezre, a suburb located on the plain below Kharput. During the reign of Sultan Abdülazîz, military barracks, a hospital and a governor's mansion were built to accommodate the seat of a new vilâyet (province). The town was renamed "Mamuretülaziz" (Template:Lang-ota made prosperous by Aziz in Ottoman Turkish) in 1866 on the occasion of the fifth anniversary of the enthronement of Sultan Abdülaziz, although he was not the initial founder. In time the city became known as "Elâzîz" due to its ease of pronunciation. On November 17, 1937, President Mustafa Kemal Atatürk changed the name of the city to "Elazık". However, since this was hard to pronounce in Turkish, on December 10, 1937 the government changed the city's name to its final form, "Elazığ".[citation needed]

The city of Elazığ was founded among the skirts of the hill on which the historical Harput Castle was constructed. According to the present historical sources, the most ancient inhabitants of Harput was the Hurrian nation who settled in these parts in c2000 B.C.

Harput, and its surrounding region was part of the kingdom of Urartu at the period of its maximum extension.[2]

The ancient town and citadel called Kharput (Kharpert), which means "rocky fortress" in Armenian, was built by the first Armenian kings about five km (3.1 miles) from modern Elazığ. However, very little written material about this city reached our day. It is possible that Harput stands on or is near the site of Carcathio-certa in Sophene, reached by Corbulo in A.D. 65. The early Muslim geographers knew it as Ḥiṣn Ziyād, but the Armenian name, Khartabirt or Kharbirt, whence Kharput and Harput, was generally adopted in time.

William of Tyre wrote that Joscelin I, Count of Edessa (Jocelyn) of Courtenay, and King Baldwin II of Jerusalem were prisoners of the Amir Balak in Kharput's castle and that they were rescued by their Armenian allies. William of Tyre calls the place Quart Piert or Pierre.

Harput and its vicinity fell under Turkish control in the year 1085 as the outcome of the Manzikert battle on August 26, 1071. The Çubukoğulları, Artuqids, Aq Qoyunlu and Ottomans had reigned in the region[3]

Harput is still partly settled today, but due to its high elevation and lack of water it is slowly in the process of being abandoned, with most of its residents moving to Elazığ. Harput still has a few thousand inhabitants.

An Armenian Catholic diocese of Kharput was created in 1850.

From its foundation until the end of the World War II, the city's growth was somewhat irregular. While the town probably consisted of 10 to 12,000 inhabitants at the beginning of the World War I, the first census conducted by the Republic of Turkey in 1927 counted 20,052 inhabitants. This figure continued to rise to reach 25,465 in 1940, but the general shortages suffered during the World War II years by the neutral Turkey led to an exodus of population, reducing the population to 23,635. From then onward, the city has gone through uninterrupted growth. Harput, in the meantime, acquired the status of a township separated from Elazığ with a population of about 2000.[citation needed] 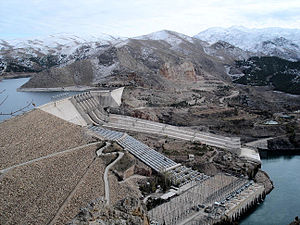 The most important factor affecting the growth of Elazığ since the 1970s has been the construction of Keban Dam and the hydroelectric power plant (5,871,000 kwh/year) with its boulder at a distance of 45 km (28 mi) from the city and the resulting huge dam reservoir. This reservoir covers an area of 68,000 hectares and it flooded around a hundred villages with a hundred others losing a large part of their agricultural lands. Around 20,000 people were forced to move as a consequence of the dam's construction.[citation needed]

Industries connected with the dam such as a cement mill contributed to the growth and, as Ayalon and Sharon points out, to a striking gap between the male and female populations in Elazığ, the former outnumbering the latter by some eight thousand throughout the seventies, which was a consequence of the move into and settlement in the city of workers employed in the construction effort.[citation needed]

Many of those who were forced to move with the construction of the dam chose to settle in Elazığ center and the state indemnities paid were invested in houses in Elazığ or laid a base for small businesses. However, the Keban Dam affected more than 30,000 people and at least 212 villages. Over 80% of families in zones affected by the Keban dam were landless peasants and thus ineligible to receive compensation or peasants with little land who would receive very little money (Koyunlu 1982: 250)

The region of Elazığ has much mineral wealth, a healthy climate and a fertile soil. Extraction of chrome is an important mining activity.[citation needed]

The dam, the industry and the mining accounts for the high level of urbanization (42.7% in 1970) surpassing the average levels for Eastern Anatolia. The main agricultural activity of the area centers around vineyards and Elazığ also serves as a market hub for other agricultural products. The state-run vineyards of Elazığ is notable for its production of Buzbağ, a full-flavored red wine.

Elazığ today is the capital of the Elazığ province, a bustling city with a university and an industrial base, although historic monuments are understandably scarce. The exception is of course the ancient Harput citadel and town, a dependency of the greater municipality of Elazığ today situated three miles (4.8 km)to the north of the city center. The population of Elazığ consists of Turks, Kurds and Zaza people.[8]

Elazığ is known for being conservative and patriotic. Not a single leftist party has managed to get a candidate elected in the past 34 years. Moreover, the BDP, an ethnic nationalist Kurdish party, has never managed to get an official elected to the Turkish Grand National Assembly in contrary to its neighbouring provinces Tunceli and Diyarbakır.[9] Elazığ is also the most developed city (and province) in the region according to a report that was carried out by the Ministry of Development, making it the most developed region of Eastern Anatolia Region.[10]

Elazığ is situated at the northwestern corner of a 30-mile-long valley, known locally as Uluova (literally the Great Valley). The area's Armenians called this valley "Vosgetashd" (the Golden Plain). Its altitude is 3,300 feet: latitude and longitude are respectively: 38 degrees and 41 minutes North, and 39 degrees and 14 minutes East. Elazığ Province is surrounded by the Euphrates in the north, and since the completion of Keban Dam the rivers came to cover almost ten percent of the surface area (826 km²) of the province (8,455 km²). Elazığ's adjacent province borders are with: Tunceli (North), Erzincan (North-West), Bingöl (East), Diyarbakır (South), and Malatya (West).

Elazığ has a continental climate (Köppen climate classification: Dsa) with cold and snowy winters and hot and dry summers. However, due to the natural and artificial lakes around the city, some partial variations from this climate is experienced.[11]

Elazığ cuisine is the second richest among all cities in Turkey with 154 different types of food and drinks according to a study conducted by Ankara Chamber of Commerce.[12] Particularly those originated in the historic city of Harput have an important fame in the region and the country. Apart from famous meat platters most of which include meatballs, naturally dried fruits and vegetables and using them in main dishes is unique to Elazığ cuisine. Several examples could include:[1]

Elazığ is also very famous with its vineyards, and two types of grape varieties Öküzgözü and Boğazkere.

Elazığ is served by Elazığ Airport which lies about 12 km (7 mi) from the city center. The airport is the 19th busiest airport in Turkey in terms of passenger traffic.[13] There are daily domestic flights from/to Ankara, Istanbul and İzmir. During summer months there are some international flights from/to cities such as Düsseldorf and Frankfurt as well as from/to Antalya and Adana.

There are local companies provide coach service to almost all cities in Turkey. Ferryboat services are also present over the reservoir lakes to supplement highway connections to towns such as Ağın, and Pertek and Çemişgezek of Tunceli.

Elazığ is home to Fırat University, established in 1975 and since has become one of the leading academic institutions in the eastern Turkey.

The football team Sanica Boru Elazığspor, founded in 1967, represents the city in the Turkish Super League having been promoted in the 2011/2012 season. The club colors are burgundy and white and the club logo is inspired by the local dance Çayda Çıra performed with candles. Elazığ Belediyespor is another professional football team representing the city in the TFF Third League. Elazığ Atatürk Stadium is the home ground to both teams with a capacity of 14,467 seats.

Hazarbaba Ski Center, at the peak of 2347m Mount Hazarbaba, is a popular ski destination among the locals.

Elazığ is also home to one of eight major horse racetracks in Turkey. Yurtbaşı Race Course has a capacity of 2,500 spectators and stables have the capacity of stabling around 400 horses. 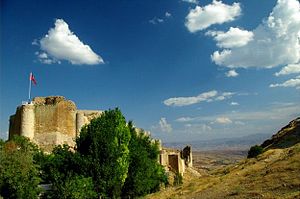 Sayray Camii in the town of Elazig 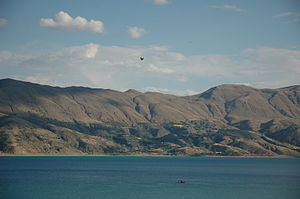 Elazığ is twinned with: