Roman dependency of Osroene (as of 31 BC) 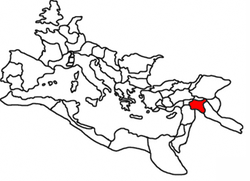 Roman province of Osroene, 120, highlighted within the Roman Empire

Osroene, also spelled Osrohene and Osrhoene (Ancient Greek: Ὀσροηνή; Classical Syriac: ܡܠܟܘܬܐ ܕܒܝܬ ܐܘܪܗܝ Malkūṯā d-Bayt ʿŌrhai) and sometimes known by the name of its capital city, Edessa (modern Şanlıurfa, Turkey), was a historical Neo-Assyrian kingdom located in Upper Mesopotamia, [1] which enjoyed semi-autonomy to complete independence from the years of 132 BC to AD 244.[2][3] It was a Syriac-speaking kingdom.[4]

Osroene, or Edessa, acquired independence from the collapsing Seleucid Empire through a dynasty of the nomadic Nabatean tribe called Orrhoei from 136 BC. The name Osroene is derived from Osroes of Orhai, a Nabatean malka who in 120 BC wrested control of this region from the Seleucids in Syria.[5] Most of the kings of Osroene are called Abgar or Manu who settled in urban centers.[6] Under its Nabatean dynasties, Osroëne became increasingly influenced by Syriac-Assyrian culture and was a centre of national reaction against Hellenism. By the 5th century, Edessa had become the headquarters of Syriac literature and learning. In 608, Osroëne was taken by the Sāsānid Khosrow II, and in 638 it fell to the Muslims.

The kingdom's area, the upper course of the Euphrates, became a traditional battleground for the powers that ruled Asia Minor, Persia, Syria, and Armenia. On the dissolution of Seleucid Empire, it was divided between Rome and Parthia. At this time Osrhoene was within Parthian suzerainty. However, the Romans later made several attempts to recover the region.

Osroene was one of several kingdoms arising from the dissolution of the Seleucid Empire. The kingdom occupied an area on what is now the border between Syria and Turkey.This kingdom was established by The Nabataeans tribes from Southern Canaan and North Arabia, and lasted nearly four centuries (c. 132 BC to 214 AD), under twenty-eight rulers, who sometimes called themselves "king" on their coinage

It was in this region that the legend of Abgar of Edessa originated.

Osroene was absorbed into the Roman Empire in 114 as a semi-autonomous vassal state, after a period under Arsacid (Parthian) rule, incorporated as a simple Roman province in 214. There is an apocryphal legend that Osroene was the first state to have accepted Christianity as state religion,[7][8] however there is not enough evidence to support this point of view.[9][10][11] The independence of the state ended in 244 CE when it was incorporated in the Roman Empire.[12] It was a frontier province, lying close to the Persian empires with which the Romans were at war with many times. It was taken and retaken several times. Being a province on the frontier it had a Roman legion stationed there, Legio III Parthica and its Castrum (homebase) was Resaena though there are some doubts on that fact. 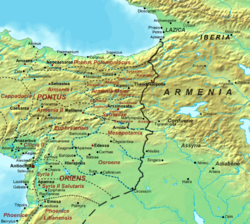 Map showing the Eastern Roman provinces, including Osroene, in the 5th century.

Since Emperor Diocletian's Tetrarchy reforms during his reign 284-305 CE, it was part of the diocese of Oriens, in the praetorian prefecture of the same name. According to the late 4th-century Notitia Dignitatum, it was headed by a governor of the rank of praeses, and was also the seat of the dux Mesopotamiae, who ranked as vir spectabilis and commanded (c. 400) the following army units:

as well as, 'on the minor roll', apparently auxiliaries:

According to Sozomen's Ecclesiastical History, "there were some very learned men who formerly flourished in Osroene, as for instance Bardasanes, who devised a heresy designated by his name, and his son Harmonius. It is related that this latter was deeply versed in Grecian erudition, and was the first to subdue his native tongue to meters and musical laws; these verses he delivered to the choirs" and that Arianism —a more successful heresy— met with opposition there.

Abgarus of Osrhoene had signed a peace treaty with the Romans during time of Pompey and was initially an ally of the Roman general Crassus in his campaign against the Parthians in 53 BC. Later on, however, he secretly switched sides and became a spy for the Parthian king Orodes II in the war effort by providing faulty intelligence to Crassus. This was one of the main factors in Crassus' defeat. He influenced Crassus' plans, convincing him to give up the idea of advancing to the Greek city of Seleucia near the Euphrates, whose inhabitants were sympathetic to the Romans. Instead Abgarus persuaded him to attack Surena; however, in the midst of the battle he himself joined the other side.[13] Abgarus has been identified as an Arab shaikh in another source.[citation needed] In this campaign, an Armenian force of 16,000 cavalry and 30,000 infantry accompanied Crassus. Orodes also managed to keep the Armenian force out by making peace with Artavazd.[14]

During Trajan's time, around 116 AD, the Roman general Lucius Quietus sacked Edessa and put an end to Osrhoene's independence. After the war with Parthians under Marcus Aurelius, forts were built and a Roman garrison was stationed in Nisibis. Osrhoene attempted to throw off the Roman yoke, however in 216, its king Abgar IX[clarification needed] was imprisoned and exiled to Rome and the region became a Roman province. In the period from Trajan's conquest (116) to 216, Christianity began to spread in Edessa. Abgar IX (179-186 AD) was the first Christian King of Edessa. It is believed that the Gospel of Thomas emanated from Edessa around 140 AD. Prominent early Christian figures have lived in and emerged from this region such as Tatian the Assyrian who came to Edessa from Hadiab (Adiabene). He made a trip to Rome and returned to Edessa around 172-173. He had controversial opinions, seceded from the Church, denounced marriage as defilement and maintained that the flesh of Christ was imaginary. He composed Diatessaron or "harmony of the Gospels"(Ewangelion da-mhalte) in Syriac, which contained eclectic ideas from Jewish-Christian and dualistic traditions. This became the Gospel par excellence of Syriac-speaking Christianity until in the 5th century Rabbula, bishop of Edessa, suppressed it and substituted a revision of the Old Syriac Canonical Gospels (Ewangelion da-mfarshe).[15]

After this, Edessa was again brought under Roman control by Decius and it was made a center of Roman operations against the Persian Sassanids. Amru, possibly a descendant of Abgar, is mentioned as king in the Paikuli inscription, recording the victory of Narseh in the Sassanid civil war of 293. Historians identify this Amru as Amru ibn Adi, the fourth king of the Lakhmid dynasty which was at that time still based in Harran, not yet moved to Hirah in Babylonia.[16]

Many centuries later, Dagalaiphus and Secundinus duke of Osrhoene, accompanied Julian in his war against the Sassanid king Shapur II in the 4th century.[17]

In his writings Pliny refers to the natives of Osroene and Commagene as Arabs and the region as Arabia.[18] According to Pliny, a nomadic Arab tribe called Orrhoei occupied Edessa about 130 BC.[19] Orrhoei founded a small state ruled by their chieftains with the title of kings and the district was called after them Orrhoene. This name eventually changed into Osroene, in assimilation to the Parthian name Osroes or Chosroes (Khosrau).[20]

Ancient episcopal sees of Osrhoene listed in the Annuario Pontificio as titular sees:[21]