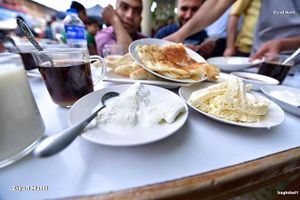 Chaldean cuisine or Mesopotamian cuisine has a long history going back some 10,000 years – to the Sumerians, Babylonians Chaldeans and Ancient Persians.[1] Tablets found in ancient ruins in Iraq show recipes prepared in the temples during religious festivals – the first cookbooks in the world.[1] Ancient Iraq, or Mesopotamia, was home to a sophisticated and highly advanced civilization, in all fields of knowledge, including the culinary arts.[1] However, it was in the Islamic Golden Age when Baghdad was the capital of the Abbasid Caliphate (750–1258) that the Iraqi kitchen reached its zenith.[1] Today, the cuisine of Iraq reflects this rich inheritance as well as strong influences from the culinary traditions of neighbouring Persia, Turkey and the Syria region area.[1]

Contemporary Iraq reflects the same natural division as ancient Mesopotamia,[3] which consisted of Mesopotamia in the arid northern uplands and Babylonia or Chaldea in the southern alluvial plain.[3] Al-Jazira (the ancient Chaldea) grows wheat and crops requiring winter chill such as apples and stone fruits.[3] Al-Irāq (Iraq proper, the ancient Babylonia) grows rice and barley, citrus fruits, and is responsible for Iraq's position as the world's largest producer of dates.[3]

Archaeologists have found evidence from excavations at Jarmo in northeastern Iraq,[4] that pistachio nuts were a common food as early as 6750 BC.[4]

Among the ancient texts discovered in Iraq is a Sumerian-Akkadian bilingual dictionary,[5] recorded in cuneiform script on 24 stone tablets about 1900 BC.[5] It lists terms in the two ancient Iraqi languages for over 800 different items of food and drink.[5] Included are 20 different kinds of cheese, over 100 varieties of soup and 300 types of bread – each with different ingredients, filling, shape or size.[5]

One of three excavated cuneiform clay tablets written in 1700 BC in Babylon,[2] 50 miles south of present-day Baghdad, deals with 24 recipes for stew cooked with meat and vegetables,[2] enhanced and seasoned with leeks, onion, garlic, and spices and herbs like cassia, cumin, coriander, mint, and dill.[2] Stew has remained a mainstay in the cuisine.[2] Extant medieval Iraqi recipes and modern Iraqi cuisine attest to this.[2]

Some characteristic ingredients of Chaldean cuisine include:

Other Iraqi culinary essentials include olive oil, sesame oil, tamarind, vermicelli, tahini, honey, date syrup, yogurt and rose water. Lamb is the favourite meat, but chicken, beef, and fish are also eaten. Most dishes are served with rice - usually timman anbar, a yellowish, very aromatic, long-grain rice grown in the provinces of Anbar and Qadisiyyah.[6] Bulghur wheat is used in many dishes, having been a staple in the country since the days of the Ancient Assyrians.[1] Flatbread is a staple that is served, with a variety of dips, cheeses, olives, and jams, at every meal. 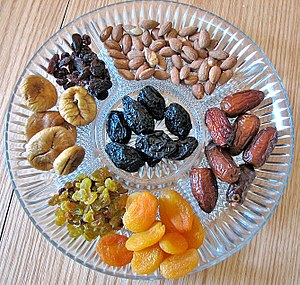 Mezza is a selection of appetizers or small dishes often served with beverage, like anise-flavored liqueurs such as arak, ouzo, raki or different wines, similar to the tapas of Spain or finger food. 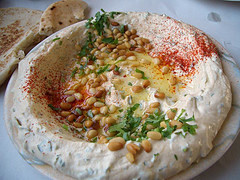 Long-grain rice is a staple in Iraqi cookery.[8][11] The Iraqi word for rice, timman, is unique to Iraq and is of Akkadian origin.

Iraqi rice cooking is similar to the method used for Persian chelow,[6] a multistep process intended to produce just-tender, fluffy grains.[6] A prominent aspect of Iraqi rice cooking is the hkaka, a crisp bottom crust.[6] It differs slightly from the Persian tahdig, which is a single thick piece; the hkaka contains some loose rice as well.[6] Before serving, the hkaka is broken into pieces so that everyone is provided with some along with the fluffy rice.[6] 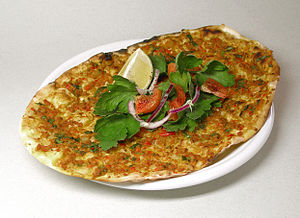 Lahm b'ajeen, garnished with parsley, tomato, red onion, and a wedge of lemon 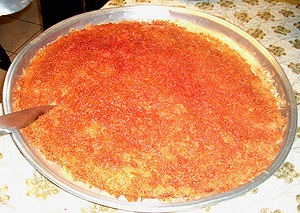 Kinafa, a sweet made with vermicelli, sugar syrup and rose water 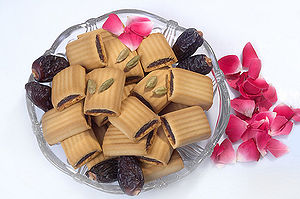