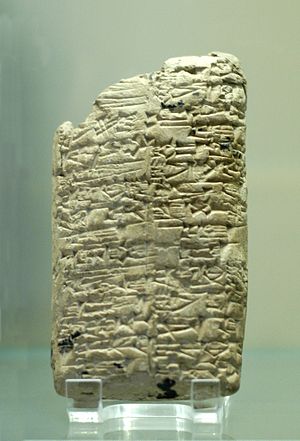 List of the victories of Rimush, king of Akkad, upon Abalgamash, king of Marhashi, and upon Elamite cities. Clay tablet, copy of a monumental inscription, ca. 2270 BC. (see Manishtushu Obelisk)

In the Ancient Near East, clay tablets (Akkadian ṭuppu(m) 𒁾)[1] were used as a writing medium, especially for writing in cuneiform, throughout the Bronze Age and well into the Iron Age.

Cuneiform characters were imprinted on a wet clay tablet with a stylus often made of reed (reed pen). Once written upon, many tablets were dried in the sun or air, remaining fragile. Later, these unfired clay tablets could be soaked in water and recycled into new clean tablets. Other tablets, once written, were fired in kilns (or inadvertently, when buildings were burnt down by accident or during conflict) making them hard and durable. Collections of these clay documents made up the very first archives. They were at the root of first libraries. Tens of thousands of written tablets, including many fragments, have been found in the Middle East.[2][3]

In the Minoan/Mycenaean civilizations, writing has not been observed for any use other than accounting. Tablets serving as labels, with the impression of the side of a wicker basket on the back, and tablets showing yearly summaries, suggest a sophisticated accounting system. In this cultural region the tablets were never fired deliberately, as the clay was recycled on an annual basis. However, some of the tablets were "fired" as a result of uncontrolled fires in the buildings where they were stored. The rest are still tablets of unfired clay, and extremely fragile; some modern scholars are investigating the possibility of firing them now, as an aid to preservation.[4]

The clay tablet was used by scribes who took down the events of what was happening during his time. Tools that these scribes used were styluses with sharp triangular tips, making it easy to leave[5] markings on the clay. Clay tablets were among one of the essential components for this type of writing, and it came in a variety of[6] colors such as bone white, chocolate and charcoal. Pictographs were then beginning to appear on clay tablets during 4000 BC Syllabic script around 2500 BC was interpreted to show of native language used.

Language and writing have come a long way since times of early human evolution. Writing was not as we see it today, for it started out as signs and characters. These special characters at the time had their own meaning and were used to take account of what was going on. This all began when people developed agriculture, started towns with population and when the trading market began to grow.[7] Above mentioned things being traded, which were sheep’s, grain, and bread loafs. Each and every one of these items was recorded by clay tokens. Clay tokens were then used all the way until pre-historic Mesopotamia.

Historically writing and the use of clay tablets began around the time period of[8] 3000 BC when Sumerians decided they were going to start writing. Sumerians used what is referred to as “pictograms”. Pictograms are symbols that express a picture rooting from the sound of a word. Early writing was then also seen in Ancient Egyptians using what they called “hieroglyphs”; hieroglyphs and modern Chinese characters represent an example of pictographs. The Sumerians than shifted their writing to[5] Cuneiform defined as “Wedge writing” in Latin.

Clay tablets took the forms of myths, fables, essays, hymns, proverbs, epic poetry, laws, plants, and animals.[6] What these clay tablets allowed was for individuals to record who and what was significant. An example of these great stories was The Story of Gilgamesh. This story would tell of the great flood that destroyed Sumer. Remedies and recipes that would have been unknown were then possible because of the clay tablet. Some of the recipes were stew, which was made with goat, garlic, onions and sour milk.

By the end of the 3rd Millennium BC, (2200-2000 BC), even the "short story" was first attempted, as independent scribes entered into the philosophical arena, with stories like: The Debate between Bird and Fish, and other topics, (List of Sumerian debates).

Communication grew faster as now there was a way to get messages across just like mail. Important and private clay tablets were coated with an extra layer of clay, that no one else would read it. This means of communicating was used for over[6] 3000 years in fifteen different languages. Sumerians, Babylonians and Eblaites all had their own clay tablet libraries.

As Sumerian writing on clay tablets became main-stream, others began to complain that the Sumerian word-signs, were indeed too complicated to master. Not everyone could interpret the signs and they wanted a writing system that was simple yet got the message across. Elamites, Hurrians and Ugaritans then eliminated this from their style or form of writing. Tablets that were found south of Baghdad were made up of literary works, dictionaries, prayers, omens and astronomical recordings that were still in their own positions. Ugarites took advantage and created the first of the Alphabets.[6] The tablet was said to have 32 cuneiform letters which was discovered in Syria about 1450 B.C. Egyptians took it to the next level by becoming the earliest individuals to have their very own writing system. Mentioned earlier they used “hieroglyphics” instead of the normal alphabets. Defining hieroglyphics you get the Greek phrase “sacred writing” because of the early belief, that knowledge was a gift from their gods. The two main types of hieroglyphics were logograms and phonograms. Logograms were usually representing certain ideas while phonograms focused on sounds that were closely alike to the alphabet.

The Tărtăria tablets, the Danubian civilization, may be still older, having been dated by indirect method (bones found near the tablet were carbon dated) to before 4000 BC, and possibly dating from as long ago as 5500 BC, but their interpretation remains controversial because the tablets were fired in a furnace and the properties of the carbon changed accordingly.[9]

Use <references />, or <references group="..." />
Retrieved from "https://chaldeanwiki.com/index.php?title=Clay_tablet&oldid=825"
Categories: