Esarhaddon (Akkadian: Aššur-aḥa-iddina "Ashur has given a brother"; Template:Hebrew Name;[1] Ancient Greek: Ασαρχαδδων;[2] Template:Lang-la[2]) was a king of the Neo-Assyrian Empire who reigned 681 – 669 BC. He was the youngest son of Sennacherib and the West Semitic queen Naqi'a (Zakitu), Sennacherib's second wife. 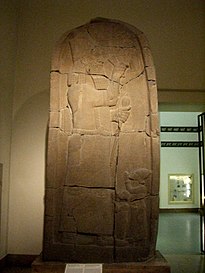 When, despite being the youngest son, Esarhaddon was named successor by his father, his elder brothers tried to discredit him. Oracles had named him as the person to free the exiles and rebuild Babylon, the destruction of which by Sennacherib was felt to have been sacrilegious. Esarhaddon remained crown prince, but was forced into exile at an unknown place beyond Hanilgalbat (Mitanni), that is, beyond the Euphrates, most likely somewhere in what is now southeastern Turkey.

Sennacherib was murdered in 681 BC. The biblical account is that Esarhaddon's brothers killed their father after the failed attempt to capture Jerusalem (2 Kings 19:37). Esarhaddon returned to the capital of Nineveh in forced marches and defeated his rival brothers in six weeks of civil war. He was formally declared king in the spring of 681 BC. His brothers fled to the land of Ararat and their followers and families were put to death. In the same year Esarhaddon began the rebuilding of Babylon, including the well-known Esagila and the Ekur at Nippur (structures sometimes identified with the Tower of Babel).[3] The statues of the Babylonian gods were restored and returned to the city. He also ordered the reconstruction of the Assyrian sanctuary of Esharra in Ashur as well. Foreigners were forbidden to enter the temple. Both buildings were dedicated almost on the same date, the second year of his reign. 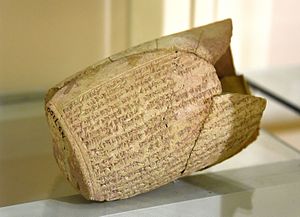 Easarhaddon cylinder from fort Shalmaneser at Nimrud. It was found in the city of Nimrud and was housed in the Iraqi Museum, Baghdad. Erbil Civilization Museum, Iraqi Kurdistan.

The first military campaigns of Esarhaddon were directed against nomadic tribes of southern Mesopotamia, the Dakkuri and Gambulu, who had been harassing the peasants. In 679 BC, the Cimmerians, who had already killed his grandfather Sargon II, reappeared in Cilicia and Tabal under their new ruler Teushpa. Esarhaddon defeated them near Hubushna (Hupisna), and defeated the rebellious inhabitants of Hilakku as well. The Cimmerians withdrew to the west, where, with Scythian and Urartuan help, they were to destroy the kingdom of Phrygia in 676 BC. 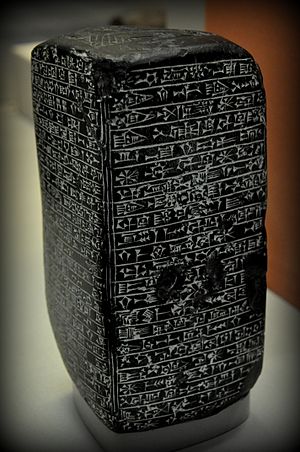 Black basalt monument of king Esarhaddon. It narrates Esarhaddon's restoration of Babylon. Circa 670 BC. From Babylon, Mesopotamia, Iraq. The British Museum, London.

The Sidonian king Abdi-Milkutti, who had risen up against the Assyrian king, was defeated in 677 BC and beheaded. The town of Sidon was destroyed and rebuilt as Kar-Ashur-aha-iddina, the "Harbor of Esarhaddon". The population was deported to Assyria. A share of the plunder went to the loyal king of rival Tyre, Baal I, himself an Assyrian puppet. The partly conserved text of a treaty with Tyre mentions the kings of Judah, Edom, Moab, Gaza, Ashkelon, Ekron, Byblos, Arvad, Samsi-muruna, Ammon, Ashdod, ten kings from the coast of the sea, and ten kings from the middle of the sea (usually identified with Cyprus), as Assyrian allies.

In 676 BC, Esarhaddon took the towns of Sissu and Kundu in the Taurus Mountains. The Mannaeans, the Scythians under their king Ishpakaia, and the "Gutians" of the Zagros proved to be a nuisance as well, as is attested by numerous oracle-texts. The Mannaeans, former vassals of the Assyrians, were no longer restricted to the area around Lake Urmia, but had spread into Zamua, where they interrupted the horse trade between Parsuash and Assyria and refused to pay further tribute. After the fall of Phrygia, a daughter of Esarhaddon was wedded to the Scythian prince Partatua of Sakasene in order to improve relations with the nomads. The Medes under Khshathrita (Kashtariti) had been the target of a campaign as well, the date of which is unclear (possibly before 676 BC). Later, Assyrian hosts reached the border of the "salt-desert" near the mountain Bikni, that is, near Teheran. A number of fortresses secured the Zagros: Bit-Parnakki, Bit-kari and Harhar (Kar-Sharrukin).

A certain Mugallu had taken possession of parts of the Syro-Hittite state of Melid, and associated himself with the king of Tabal. The city of Melid was besieged in 675 BC, but without success. That same year, Humban-Haltash II of Elam began a campaign against Sippar, but was defeated by the Babylonians, and died soon afterwards. His brother and successor Urtaki restored peace with Assyria. 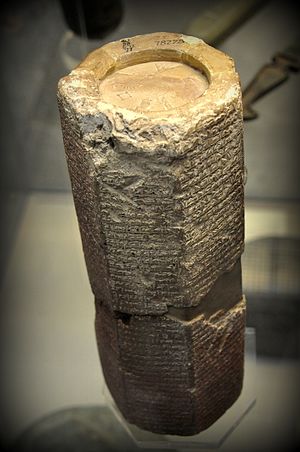 Terracotta record of king Esarhaddon's restoration of Babylon. Circa 670 BC. From Babylon, Mesopotamia, Iraq. The British Museum, London.

A preliminary campaign against Egypt begun by Esarhaddon the next year seems to have failed. Meanwhile, Esarhaddon was waging war in the land of Bazu, situated opposite of the island of "Dilmun"[citation needed] (Bahrain), probably Qatar, "where snakes and scorpions cover the ground like ants" - a dry land of salt deserts. In 673 BC, Esarhaddon waged war against Urartu under king Rusas II, which had strengthened again after the ravages of Sargon II and the Cimmerians.

In 672 BC, crown prince Sin-iddina-apla died. He had been the oldest son and designated as king of Assyria, while the second son Shamash-shum-ukin was to become the ruler of Babylon. Now, the younger Ashurbanipal became crown prince, but he was very unpopular with the court and the priesthood. Contracts were made with leading Assyrians, members of the royal family and foreign rulers, to assure their loyalty to the crown prince.

In 671 BC, Esarhaddon went to war against Pharaoh Taharqa of Egypt. Part of his army stayed behind to deal with rebellions in Tyre, and perhaps Ashkelon. The remainder went south to Rapihu (Rafah, near Gazah), then crossed the Sinai and entered Egypt. In the summer, he took Memphis, and Taharqa fled to Upper Egypt. Esarhaddon now called himself "king of Egypt, Patros, and Kush", and returned with rich booty from the cities of the delta; he erected a victory stele at this time, showing the son of Taharqa in bondage, Prince Ushankhuru. Almost as soon as the king left, Egypt rebelled against Assyrian rule.

Esarhaddon had to contend with court intrigues at Nineveh that led to the execution of several nobles, and sent his general, Sha-Nabu-shu, to restore order in the Nile Valley. In 669 BC, he went to Egypt in person, but suddenly died during autumn of the same year, in Harran. He was succeeded by Ashurbanipal as king of Assyria, and Shamash-shum-ukin as king of Babylonia.