Third Dynasty of Ur

From ChaldeanWiki
Jump to: navigation, search
This page is a translated version of the page Third Dynasty of Ur and the translation is 100% complete.
Other languages:
العربية • ‎ܐܪܡܝܐ • ‎English • ‎français 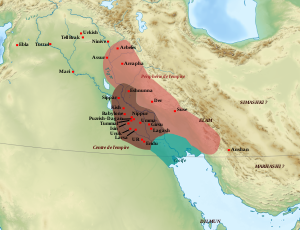 Map showing the Ur III state and its sphere of influence

The Third Dynasty of Ur, also known as the Neo-Sumerian Empire, refers simultaneously to a 21st to 20th century BC (short chronology timeline) Sumerian ruling dynasty based in the city of Ur and a short-lived territorial-political state that some historians regard as a nascent empire. The Third Dynasty of Ur is commonly abbreviated as Ur III by historians studying the period.

The Third Dynasty of Ur was the last Sumerian dynasty which came to preeminent power in Mesopotamia. It began after several centuries of control by Akkadian and Gutian kings. It controlled the cities of Isin, Larsa and Eshnunna and extended as far north as the Jazira.

The Third Dynasty of Ur arose some time after the fall of the Akkad Dynasty. The period between the last powerful king of the Akkad Dynasty, Shar-Kali-Sharri, and the first king of Ur III, Ur-Nammu, is not well documented, but most Assyriologists posit that there was a brief "dark age", followed by a power struggle among the most powerful city-states. On the king-lists, Shar-Kali-Shari is followed by two more kings of Akkad and six in Uruk, however there are no year-names surviving for any of these, nor even any artifacts confirming any of these reigns were historical — save one artifact for Dudu of Akkad (Shar-Kali-Sharri's immediate successor on the list). Akkad's primacy instead seems to have been usurped by Gutian invaders from the Zagros, whose kings ruled in Mesopotamia for an indeterminate period (124 years according to some copies of the kinglist, only 25 according to others.) An illiterate and nomadic people, their rule was not conducive to agriculture, nor record-keeping, and by the time they were expelled, the region was crippled by severe famine and skyrocketing grain prices. Their last king, Tirigan, was driven out by Utu-hengal of Uruk, beginning the "Sumerian Renaissance".

Following Utu-Hengal's reign, Ur-Nammu (originally a general) founded the Third Dynasty of Ur, but the precise events surrounding his rise are unclear. The Sumerian King List tells us that Utu-hengal had reigned for seven years (or 426, or 26 in other copies), although only one year-name for him is known from records, that of his accession, suggesting a shorter reign.

It is possible that Ur-Nammu was originally his governor. There are two stelae discovered in Ur that include this detail in an inscription about Ur-Nammu's life. Some scholars theorize that Ur-Nammu led a revolt against Utu-hengal, deposed him, and seized control of the region through force.

Another hypothesis is that Ur-Nammu was a close relative to Utu-hengal, and the latter had asked the former to rule over the city of Ur in his name. After four years of ruling in Ur, Ur-Nammu rose to prominence as a warrior-king when he crushed the ruler of Lagash in battle, killing the king himself. After this battle, Ur-Nammu seems to have earned the title 'king of Sumer and Agade.'

The details of how the kingdom switched hands are unclear, but some scholars oppose the idea that Ur-Nammu staged a hostile takeover. For one thing, Ur and Uruk continued to foster, seemingly uninterrupted, a close relationship. Also, Mesopotamian kings tended to disparage publicly any rulers they were able to defeat, but no such evidence exists to show that Ur-Nammu fought against Utu-hengal.[citation needed]

Ur's dominance over the Neo-Sumerian Empire was consolidated with the famous Code of Ur-Nammu, probably the first such law-code for Mesopotamia since that of Urukagina of Lagash centuries earlier.

Many significant changes occurred in the empire under Shulgi's reign. He took steps to centralize and standardize the procedures of the empire. He is credited with standardizing administrative processes, archival documentation, the tax system, and the national calendar. He established a standing army of Ur. Shulgi was deified during his lifetime, an honor usually reserved for dead kings.

With the fall of the Ur III Dynasty after an Elamite invasion in 2004/1940 BC (middle/short chronology respectively), Babylonia fell under foreign (Amorite) influence.

Assyriologists employ many complicated methods for establishing the most precise dates possible for this period, but controversy still exists. Generally, scholars use either the conventional (middle) or the low (short) chronologies. They are as follows:

An early code of law

One salient feature of Ur III is its establishment of one of the earliest known law-codes, the Code of Ur-Nammu. It is quite similar to the famous codex of Hammurabi, resembling its prologue and bodily structure. Extant copies, written in Old Babylonian, exist from Nippur, Sippar, and also Ur itself. Although the prologue credits Ur-Nammu, the author is still somewhat under dispute; some scholars attribute it to his son, Shulgi.

The prologue to the law-code, written in the first person, established the king as the beacon of justice for his land, a role that previous kings normally did not play. He claims to want justice for all, including traditionally unfortunate groups in the kingdom like the widower or the orphan.

More legal disputes were dealt with locally by government officials called mayors, although their decision could be appealed and eventually overthrown by the provincial governor. Sometimes legal disputes were publicly aired with witnesses present at a place like the town square or in front of the temple. However, the image of the king as the supreme judge of the land took hold, and this image appears in many literary works and poems. Citizens sometimes wrote letters of prayer to the king, either present or past.

Even though this period is referred to as the Sumerian Renaissance,[by whom?] this does not imply that the Ur III kings ignored their Akkadian predecessors in favor of Sumerian culture. Rather, this period witnessed a revival of Sumerian language and literature even while the Ur III kings emphasized their ties to the Akkad Dynasty as well[dubious – discuss]. Sumerian dominated the cultural sphere and was the language of legal, administrative, and economic documents, while signs of the spread of Akkadian could be seen elsewhere. New towns that arose in this period were virtually all given Akkadian names. Culture also thrived through many different types of art forms. 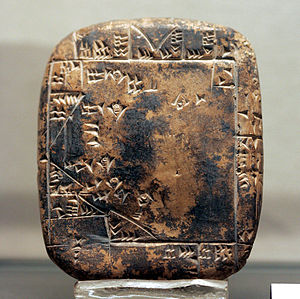 Plan of a real estate of the city of Umma, with indications of the surfaces of the parts. Third Dynasty of Ur, Louvre.

The Ur III kings oversaw many substantial state-run projects, including intricate irrigation systems and centralization of agriculture. An enormous labor force was amassed to work in agriculture, particularly in irrigation, harvesting, and sowing.

Textiles were a particularly important industry in Ur during this time. The textile industry was run by the state. Many men, women, and children alike were employed to produce wool and linen clothing. The detailed documents from the administration of this period exhibit a startling amount of centralization; some scholars have gone so far as to say no other period in Mesopotamian history reached the same level.

Trading was another huge industry. The state employed independent merchants to run such commercial activities through a barter system. A standard system of weights was established to aid this process. Coins made of copper, bronze, gold, or silver were produced in certain, pre-set weights so merchants could easily discern values.[citation needed]

The land ruled by the Ur III kings was divided up into provinces that were each run by a governor (called an ensí). In certain tumultuous regions, military commanders assumed more power in governing.

Each province contained a redistribution center where provincial taxes, called bala, would all go to be shipped to the capital. Taxes could be payable in various forms, from crops to livestock to land. The government would then apportion out goods as needed, including giving food rations to the needy and funding temples.

This is an area where scholars have many different views. It had long been posited that the common laborer was nothing more than a serf, but new analysis and documents reveal a possible different picture. Gangs of laborers can be divided into various groups.

Certain groups indeed seem to work under compulsion. Others work in order to keep property or get rations from the state. Still other laborers were free men and women for whom social mobility was a possibility. Many families travelled together in search of labor. Such laborers could amass private property and even be promoted to higher positions. This is quite a different picture of a laborer's life than the previous belief that they were afforded no way to move out of the social group they were born into.

Slaves also made up a crucial group of labor for the state. One scholar estimates [citation missing] that 2/5 of chattel slaves mentioned in documents were not born slaves but became slaves due to accumulating debt, being sold by family members, or other reasons. However, one surprising feature of this period is that slaves seem to have been able to accumulate some assets and even property during their lifetimes such that they could buy their freedom. Extant documents give details about specific deals for slaves' freedoms negotiated with slaveowners.

Sumerian texts were mass-produced in the Ur III period; however, the word 'revival' to describe this period is misleading because archaeological evidence does not offer evidence of a previous period of decline. Instead, Sumerian began to take on a different form. As the Semitic Akkadian language became the common spoken language, Sumerian continued to dominate literature and also administrative documents. Government officials learned to write at special schools that used only Sumerian literature.

Some scholars believe that the Uruk Epic of Gilgamesh was written down during this period into its classic Sumerian form. The Ur III Dynasty attempted to establish ties to the early kings of Uruk by claiming to be their familial relations.

For example, the Ur III kings often claimed Gilgamesh's divine parents, Ninsun and Lugalbanda, as their own, probably to evoke a comparison to the epic hero.

Another text from this period, known as "The Death of Urnammu", contains an underworld scene in which Ur-Nammu showers "his brother Gilgamesh" with gifts.